The organ at St Paul’s 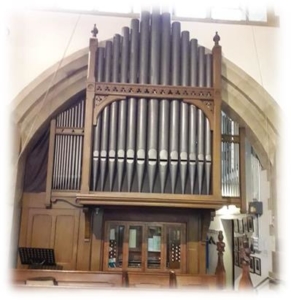 Our refurbished instrument made its formal entry into service last December with a Celebratory Concert in honour of the 80th birthday of our Director of Music, Charles Edmondson. This was a gilded occasion before a large audience of invited guests, friends, Charles’s relations and members of our congregations. Those attending included Charles’s wife, Eileen, and son, Richard (who spoke to us about the work of the Emma Gyles Bursary Fund for Ovarian Cancer Research), the Diocesan Organ Adviser, John Scott, and Mr & Mrs Malcolm Spink of J M Spink Ltd, the Leeds-based company who carried out the work on the organ, and many others.

The very varied and carefully crafted programme combined works to show something of the organ’s range and depth of tone, with  songs sung by Wendy Sharrock, the noted local mezzo soprano who has also performed at many of the lunch-time concerts for which St Paul’s is now enjoying a strong reputation.  The theme chosen for the concert was “The Ages of Man.”

With coffee and tea available beforehand and champagne served with cake afterwards, it was a gilded and most enjoyable morning. Those present showed their appreciation by generous (and largely gift-aided) donations to the Emma Gyles Bursary Fund and our own Organ Fund, which both benefitted by some £500. Our thanks go to all who worked so hard to make the morning a success, especially Charles and his family, and our Catering Team who dispensed the refreshments with such charm and efficiency.

A final thank you goes to all, including the PCC, who contributed over the last 12 months to the funding of the refurbishment work. As recorded earlier, the funds raised were considerably more than we had hoped for, and so were the costs of the work, but fortunately the former exceeded the latter and the PCC’s contribution was thus lower than we had anticipated. All in all, a “win win” situation for everyone. Now let’s enjoy the music.