A Parish Magazine of 1898 states “an afternoon service at the Church room on Grange Fell has been recommended for the winter months”. This ‘room’ was in the home of Mrs Nell Smith, 7 Front Row Cottages, Fell Road, who generously provided accommodation so that the serving community who lived ‘up the Fell’ could worship regularly.

Nine years later, in 1907, Miss Sophia Mary Arkwright generously provided money in memory of her sister, Miss Harriet Beck Arkwright, for the building of the Fell Church Room, which was dedicated on 26 April of that year by the Rt Revd Dr Diggle, Bishop of Carlisle. 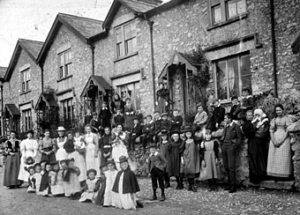 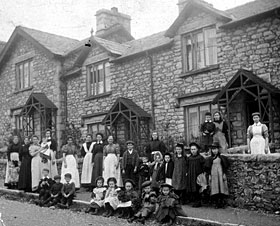 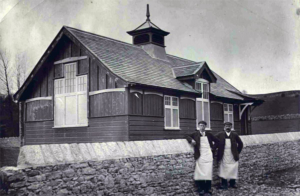 According to the Parish Magazine of September 1967:

‘It was built upon a stone basement, which forms a capital storeroom below, under the superintendance of Mr George Thompson, a resident on Grange Fell in former years.  The clever and comely superstructure has been erected by Mr Wrinch of Ipswich, who is a specialist in such buildings. It is all of wood, and roofed with American ‘cedar’ shingles, which give a charming effect.  A folding screen crosses the east end, to enclose, when not in use, the Holy Table and other adjuncts of Divine Service.  When he screen is closed, the room can be used for other purposes.’

The Misses Arkwright lived originally in Eggerslack House, but Sophia Arkwright moved to Nutwood (later Bayview Nursing Home) after her sister died.  The picture on the left is of Henrietta, and the one on the right shows her sister (L), with a companion.

Henrietta and Sophia were the great great granddaughters of Sir Richard Arkwright, whose spinning machines revolutionised the manufacture of cotton, and who was the founder of the modern factory system, the creator of a new industrial society that transformed England.

On Empire Day Henrietta gave the children at the primary school nuts and oranges! 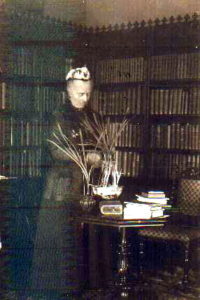 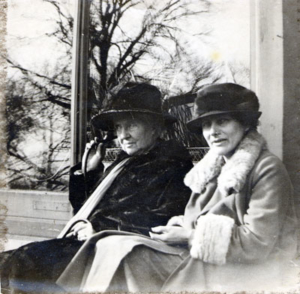 In 1933, when the Parish Church was being reordered, the original east window was moved to the Fell Church Room, and in 1950 the length of the Room was increased by one third, a slate roof was erected, and the outside pebble-dashed. Water was laid on, a kitchen was created, and offices were provided. The interior was beautified as a result of a large number of gifts in memory of parishioners who have worshipped in and worked for this Church. Such gifts include oak panelling for the chancel, a new oak altar, Communion rails, altar books, bible, cruets and other stained glass windows. 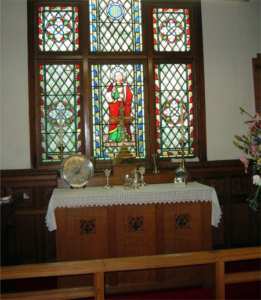 On Sunday, 29th April 2007, the parish celebrated the centenary of this little church, with a two-day exhibition, and a special service of Evensong.

“All in the April Evening” sung at Evensong by St. Paul’s choir brought to a close three days of celebrations in Fell Church to mark its centenary, all that remained was a visit to the grave of Henrietta and Sophia Arkwright in Grange Cemetery. Members of the congregation made their way up the hill after the service to lay flowers as a tribute to the two sisters who were responsible for the purchase of land and building the mission church a hundred years ago. Earlier in the day members of the Fell congregation enjoyed a buffet lunch kindly donated by two of their number. It was interesting to learn from the Rector’s sermon at Evensong that though numbers attending Fell Church are quite small the average weekly attendance of about thirty per week has remained constant over the past hundred years.

An exhibition in church during the week displayed many photographs and archive material one aspect of which dealt with the benefactors, their family background and the countless ways in which they influenced life in Grange. Other displays showed the development of the community on “Upper Grange” and the history of Fell Church which had actually begun many years earlier when local residents met in “The Church Room” at number 7 Fell Cottages for services and fellowship.

During the two open days about 120 people visited the little church to admire floral arrangements, generously given by Grange Flower Services, to view photographs and peruse the documents on display, many visitors returning for a second visit as there was too much to take in at one time. Descendants of the first residents and people still living in the cottages were happy to relate their recollections to those present adding an extra buzz to the event.

A booklet “A History of Worship in Higher Grange” was on sale and that too proved very popular. (Some copies still available in church or by ringing 34352) 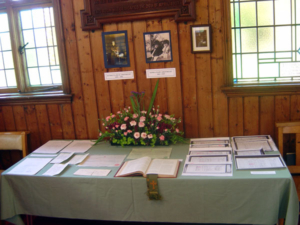 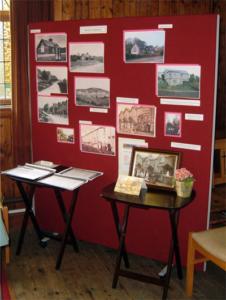 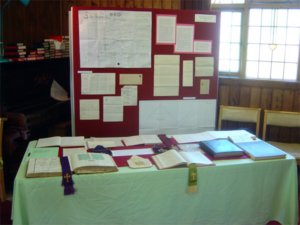