A Day of Prayer and Thanksgiving

On a lovely sunny September day about 30 people gathered at Boarbank Hall for the annual day of reflection organised by the Grange group of Co-workers of Mother Teresa. Folk had travelled from Seascale on the west coast, from Manchester and from Liverpool, and were joined by Missionary of Charity Brother Mark from the Manchester House and Sisters Rosalind and Bethany from the MC House in Seel Street, Liverpool.

The day started with Mass in the chapel at Boarbank, before listening to a heart-rending account by lay missionary Sean of his conversion in a prison cell where he was awaiting trial for conspiracy to murder two police officers. He was acquitted at the trial and has since been out in India working with the Mother Teresa sisters. There followed accounts by the MC Sisters and Brother of the work they are doing. In Liverpool Sister Rosalind told how the House was originally purchased in the centre of Liverpool when it was surrounded by affluent shops, whereas now it is in the heart of the Clubs and pubs. She told of a new initiative ‘Night Fever’ when they open their doors on a Friday and Saturday evening and invite the merry-makers in to light a candle in the chapel. It was a remarkable account of the response they are getting. In Manchester Brothers Ruben and Ben spend two days each week in Strangeways Prison, while Brother Mark ministers to the young lads mainly through their bicycles! Having trouble with his knees Mark has taken to riding round the streets and now finds that the young lads come knocking on the door asking for him to mend their bikes! 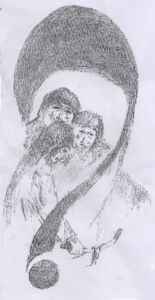 Lunch followed, mostly taken sitting outside in the sunshine enjoying the views over towards Humphrey Head. Afterwards we had short reports from the various co-worker groups in the north of the work they are involved in. We then listened to Rachael who told us about the fantastic work being done at ‘Women’s Community Matters’ at the Nan Tait Centre in Barrow with the youngsters, the mothers with young families, and young offenders returning from prison sentences. They are now branching out and providing programmes boys and young lads. She was followed by Sophie, who co-ordinates the Street Angels in Barrow; they go out in pairs or threesomes at weekends from 11pm to 3 am walking around the streets offering help where they can to vulnerable girls and trying to avert fights among the lads. We lead a very sheltered life here in Grange! The programme finished with a meditation led by Brother Mark on youth – you may like to read the poem that he had written.

All in all, it was a very thought-provoking and meaningful day.