Anyone entering St Paul’s on Monday morning would have been overwhelmed by the scent of oranges, the twinkling of the lights on the 26 trees in the Christmas Tree Festival, and the sweet sound of carols being sung by the team of eight workers making up the Christingles for the children’s service on Christmas Eve. 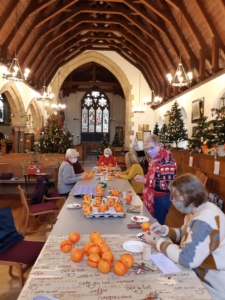 The idea of Christingles came from a Moravian Church in Germany in 1747, when the minister gave each child at the service a lighted candle with a red ribbon around it, representing Jesus as the light of the world.  The name Christingle comes from the German word Christkindl, meaning ‘Little Christ Child’.

Our helpers spent just under two hours making up 150 oranges, each representing the world, and tying round them the red ribbon which signifies the blood that Jesus shed for us.  Cocktail sticks were filled with dried fruits and sweets, the fruits of the earth, and four sticks were placed in each orange symbolising both the four seasons and the four corners of the earth.  The candle for the top of the orange will this year be replaced by a glo-stick, which will be put into position just before the Christingle is handed to each child as they enter the church for the service on Christmas Eve. 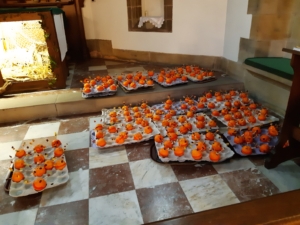 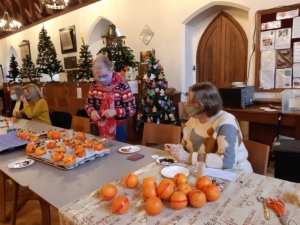 Over the last 50 years Christingle celebrations have raised millions of pounds for the Children’s Society, and donations at our service will once again be sent to support their work.

The final prayer of that first service in Moravia was

“Lord Jesus, kindle a flame in these children’s hearts,