Charles’ First Concert of the Season 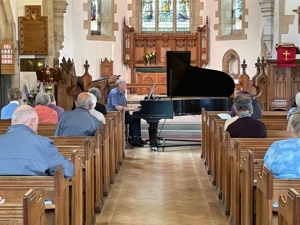 The programme was as fresh and as varied as ever, with music from four countries interpreted on our newly tuned piano and organ by Charles in full flow. There was the usual blend of familiar and not so familiar numbers – a delicate Haydn sonata in G and “Musical Moments” from Schubert, followed by familiar pieces by Toselli (whom your writer had never heard of) and Mascagni. The “big one” was the César Franck Chorale on the organ which ranged from ebullient to moving.

Of course, Charles likes to tease us: we learnt that it was a Belgian (Franck) who is regarded as the leader in French organ music, the Chorale is not a choral work, and we finally enjoyed a modern American composer named German.

The next concert organised by Charles was for Ascension Day.

The Roof of St Paul’s Church raised on Ascension Day 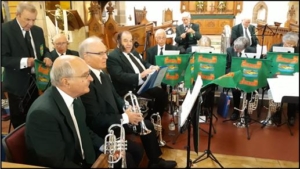 This is probably the first time that the roof of our church has been raised (metaphorically speaking) on an Ascension Day. Sixteen brass players from South Cumbria descended on St Paul’s on the morning of 23 May along with their instruments, resulting in a very entertaining concert of varied music being performed in church which, incidentally, has admirable acoustics for listening to such a group.

The South Cumbria Brass Band is a group of players of all the usual brass instruments who meet on a weekly basis in Ulverston to rehearse music which they play at agricultural shows and other local functions. Thursday’s concert provided an opportunity for them to play in Grange-over-Sands in our series of mid-week concerts. 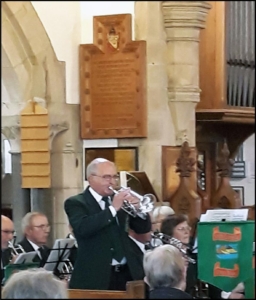 For the first time in a public concert the band was conducted by their newly appointed director, Anthea Bremner, who gave a clear lead throughout the performance.  The concert got off to a good start with Lionel Monkton’s Oh, listen to the band, and, oh boy, did the audience do just that?

What followed was a miscellany of pieces, old and new, some firm favourites and some less well-known. We were treated to Leroy Anderson’s Trumpeter’s Lullaby, the solo of which was expertly played by the band’s leading cornet player, and from the enthusiastic applause after Vivian Ellis’ “Spread a little happiness” members of the quite large audience were obviously enjoying themselves. Foot tapping was in evidence throughout the church.

Pieces were introduced by Ian Bird who gave us useful information before each piece. He was anxious to point out that all the players in the band were retired senior citizens. They created some lovely sound modules, but still need to learn to play exactly together as there were a few ragged moments here and there.

However, the concert came to a thrilling conclusion with a lovely rendering of Ron Goodwin’s Aces High.

For his next concert on the 30th June Charles compiled a programme which contained some serious music as well as some quite frivolous pieces. One thing is certain, the programme was certainly varied.

The first half comprised dance collections of music all played on the piano, with different tempos and musical notations. Some tunes we recognised and some we didn’t. 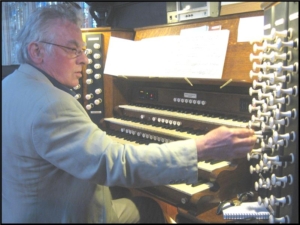 The second part included three different organ pieces played on our recently restored organ, all with ‘French connections’ as he explained.  The first was entitled Apparition de l’Eglise éternelle (the apparition or dawn of the eternal church) and was written in 1932 by the French composer, organist and teacher, Olivier Messiaen. His music is among the most influential and idiosyncratic of the 20th century and was compounded from his deep Catholic faith, his celebration of human love, and his love of nature.  Both organists and non-organists seem to react strongly to the name Olivier Messiaen.  His music appears to be either loved or hated, revered or incomprehensible.  It made us think of horror movies and dark somewhat sinister places!  Audiences have been known to leave in the middle of performances of this music!

The first piece by Alexandre Guilmant was passive and soft – a completely different to what we had just experienced!  The second was a tune entitled Sortie in E Flat, composed by Lefebure-Wely which very much reminded us of fairground organ music being played as opposed to our instrument in church. This was lively and amusing to listen to.

Marching and waltzing with Charles

Charles’s latest concert in St Paul’s at end-July was a further most enjoyable morning with a varied collection of works by the masters from Giuseppe Verdi and Frederic Chopin through to Eric Coates, Dave Brubeck and Mons Leidvin Tackle. Our foots tapped and our fingers twitched.

If two of the roles that music plays are to cause enjoyment and to evoke moods or scenes, then these were present in spades. The Chopin Waltz in A minor reminded me of a cosy BBC1 Sunday night serial of a Jane Austen novel with a doughty Army officer viewing whether a racy subaltern would be a suitable match for his daughter. The Satié waltz evoked “a seedy and smoke-filled Parisian café” (shades of Mme Edith in ‘Allo ‘Allo).  Piernés March of the little lead soldiers took me to a children’s nursery.  Of course, the final item – Eric Coates’ march Calling all Workers – took many in the audience back to our post-Second World War years when the radio was virtually our only form of entertainment. 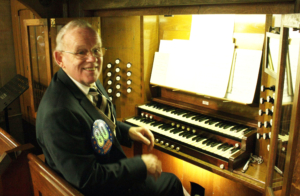 All pieces were interpreted with sympathy and skill by Charles, accompanied by Eileen as stop-gap page-turner and (this time) stop-puller when required. We are fortunate that Charles devotes his time and his artistry to entertaining us. Just under 40 people enjoyed their morning, accompanied by coffee/tea and refreshments provided by our generous ladies who also devote time and care to us, and made generous donations which serve to support our church and to keep our musical instruments in good order.