You are here: Home1 / About2 / The Arkwright Story3 / Sophia Mary Arkwright

1841 Sophia was born on 1st January in Bodenham, Herefordshire, the second child of Henry and Harriet Arkwright, and sister to Henrietta.

1893 Sophia joined her sister at Eggerslack, when Henrietta moved from Nutwood after the death of their uncle, the Revd Edward Massie.

1898 Sophia built almshouses at Bodenham, at a cost of £1,700, in memory of her father. These four houses were endowed by the two sisters with money producing about 5s per week for each occupier, together with a supply of coal. They were intended for three aged widows and a nurse to care for them and others in the parish.

1905 Grange Red Book for 1905 recorded ‘The Misses Arkwright – ever mindful of the wants of those in humbler circumstances in life – again very thoughtfully entertained the aged inmates of the Ulverston Workhouse to tea and other delights at Eggerslack’ and on Empire Day, 24th May, they gave the children at the primary school nuts and oranges!

Sophia sold Eggerslack House, and moved across the wood to Nutwood, the earlier home of Henrietta. [Nutwood later became the home of Mary Wakefield (1853-1901). Barred by the conventions of the day from pursuing a career as a professional singer, she poured her love of music into a desire to make music more available to rural communities. She founded the annual festival held in her name in Kendal.]

During this time, Henrietta’s coachman was a Mr Steen, who lived in the Lodge at the bottom of the drive on Windermere Road, with the horses stabled next door. He and his wife adopted a little girl, Marguerite (1894-1975), who became the noted novelist and playwright. Once the motor car appeared in Grange, Sophia sold the horses and bought her own machine.

1906 Sophia purchased from William Blair a parcel of freehold land (1,210 sq yards) opposite Front Row, Higher Grange, for the ‘Fell Mission Church’. All building costs were met by Sophia, in memory of her sister Henrietta.

1907 The Fell Church Room was dedicated by the Bishop of Carlisle on 26th April.

1911 In the November Parish Magazine, the first reference is made to the building of a Parish Hall, with plans for a bazaar to raise funds for the Hall and for the re-building of the Parish Church. The Hall was to be built first as a venue for services while the Church was being altered. The bazaar raised £511, and a site was purchased on Kents Bank Road.

1912 Sophia laid the foundation stone for the Parish Hall on 19th July.

1914 At the harvest festival service at St Paul’s ‘a lady member of the congregation wiped off the deficit of the building costs’ – could this have been Sophia?

1929 Sophia died on 21st August aged 88 and was buried in Grange cemetery with her sister.

‘Miss Arkwright had suffered from heart weakness for some time, but apart from this she enjoyed good health and was able to take regular outdoor exercise. On Saturday evening her companion saw her to bed and left her saying her prayers by the bedside. On returning shortly afterwards she found Miss Arkwright had passed peacefully away. The town has lost one of its leading and most esteemed residents’ .

Sophia was a talented artist, and exhibited her work at the art exhibitions held annually in the Victoria Hall. She was President of the Nursing Association, and an enthusiastic supporter of the Church Missionary Society. She frequently held meetings in her drawing room at Nutwood in its support, and entertained visiting missionaries. She was the founder of the CMS medical missions working party, and of the Scripture Readers’ Union, being secretary for many years.

Amongst her many bequests were the following.

The remainder of her estate was to be divided between any surviving sisters, her cousins, nephews and nieces. 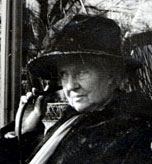