You are here: Home1 / About2 / The Arkwright Story3 / Sir Richard Arkwright

1732 Richard Arkwright was born on 23rd December in Preston, the youngest of 13 children born to Thomas Arkwright, a tailor. He was baptised at Bolton on the 31 December. Richard’s parents were very poor and could not afford to send him to school and instead arranged for him to be taught to read and write by his cousin Ellen.

1750 Richard moved to Bolton-le-Moors, where he worked for a wig-maker, and ‘shaved chins for a penny’. He had a love of gadgetry; he was a genius with mechanics, and went on to ‘invent’ spinning by rollers.

1755 On 31st March Richard married Patience Holt, and set up business as a barber-surgeon. Like many barbers in those days he also pulled teeth and performed minor operations. Richard and Patience had a son, Richard, on 19th December, but Patience died the following year.

1761 Richard married Margaret Biggins, but she left him in the 1770s for being too wedded to his work.

1762 An ambitious young man with a strong desire to run his own company, Richard started his own wig-making business, and he began to travel throughout the North-west and the Peak District buying hair.

1771 Richard began to build the world’s first successful water-powered cotton spinning mill in Cromford, in the Derwent Valley of Derbyshire, and to develop the village in order to house workers for the mills. He lived at Rock House in Mill Lane, opposite the Cromford mills, and acquired both land and property. In the early 1800s his firm employed over 1800 workers.

1782 Richard purchased the manor of Willersley, adjacent to Cromford, for £8,864.

1786 Richard was knighted by George III and appointed Sheriff of Derbyshire the following year.

1787 Sir Richard began the construction of Willersley Castle on a site 400 feet above sea level, facing due south for maximum sunlight throughout the year. During the construction of the castle there was much ridicule from the local nobility. Lord Torrington described it as an ‘effort of inconvenient ill taste’ – now it is a Grade 2 listed building!

1792 Sir Richard died before Willersley Castle was completed, and he was buried in Matlock. In just over 20 years he had made a fortune entirely in cotton. His wealth at the time of death was rumoured to have been ‘little short of half a million’. He was described as the ‘father of the factory system’ and the developer of the spinning frame.

1797 St Mary’s Chapel, Cromford, was opened on 4th June, and consecrated on 20th September by the Bishop of Lichfield. Started by Sir Richard as a private chapel in the grounds of Willersley Castle, the building was completed by his son. On its completion, Sir Richard’s body was exhumed and reburied in a vault beneath the altar. On 17th March 1869 it became the parish church of Cromford. 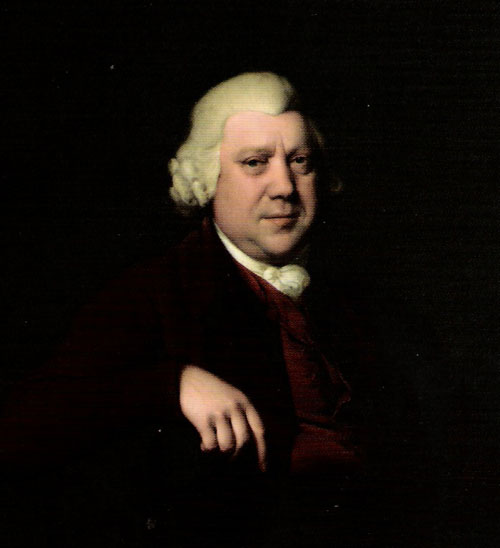 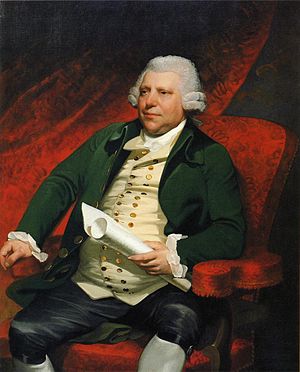 Portrait of Richard Arkwright by American artist Mather Brown, 1790, intended for Arkwright’s London house – 8 Adam Street . He holds a rolled up parchment which may be the speech Arkwright delivered to King George III on the occasion of his receiving a knighthood in 1786, or it may be a copy of his patent for his cotton-spinning machinery, or the plan of a newly acquired estate.