You are here: Home1 / About2 / The Arkwright Story3 / Richard Arkwright II

1780 Richard married Mary Simpson, by whom he had 11 children, six of them boys – Richard, Robert, Peter, John, Charles, Joseph. His wealth enabled his sons to enter the higher reaches of landed society; they were educated at Eton or Harrow, followed by Christ Church, Oxford, or Trinity College, Cambridge, before entering careers in the church, parliament, the law or the army.

1792 Richard and his family moved to Rock House, Cromford, on the death of Sir Richard, and into Willersley Castle when it was finally completed in 1795.

1801 Richard was appointed Sheriff of Derbyshire.

1838 Richard gave each of his adult children a £10,000 bank note at Christmas. He loaned money to Georgiana, Duchess of Devonshire, to settle her considerable gambling debts contracted without the knowledge of the Duke.

1843 Richard died on 23rd April and was buried in St Mary’s Chapel, Cromford. No less lacking in business acumen than his father, he carried on the Arkwright businesses, acquired further mills, and, in his concern for the health of his workers, he introduced improved methods of warming and ventilating his mills. With his profits from cotton spinning he acquired several large estates, and invested heavily in Government stock. At the time of his death he was the largest holder of such funds in the country, and was reputed to be the richest commoner in Europe! He died a far richer man than his father, with an estate estimated at over £3 million. He made his first million by 1803, his second by 1823 and his third by 1836! 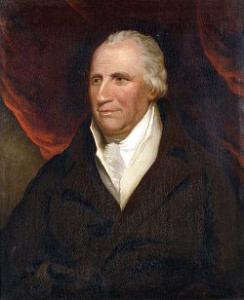