You are here: Home1 / About2 / The Arkwright Story3 / Peter Arkwright

1784 Peter Arkwright was born on 17th April at Bakewell, Derbyshire, where his father, Richard II, owned the spinning mill. He was the third son and was educated at Eton, but was the only son not to go to university. Instead, he stayed at Cromford and joined his father in running the family mills.

1805 Peter married his cousin, Mary Anne Hurt, on 2nd September. They had 16 children, 13 of whom survived childhood. His father gave Peter £500 on his marriage and made him a business partner. Two years later he gave him £3,000 for furniture!

1833 Peter and his four surviving brothers were each given £3000 by their father, and a further £2000 each in the following years.

1843 Up to the time of his father’s death, Peter and Mary and their family lived at Rock House, Cromford, with 13 servants to run the household. They then moved into the grander Willersley Castle. Peter took over the running of the Cromford mills, and carried out his duties as local squire.

1866 Peter died on 19th September, aged 82, and together with his wife, who survived him by almost six years, is interred in the family vault in St Mary’s Church, Cromford. 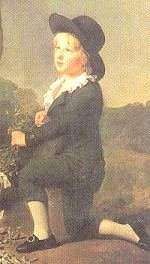