You are here: Home1 / About2 / The Arkwright Story3 / Henrietta Beck Arkwright

1839 Henrietta was born in Siddington, Cheshire, the first-born of Henry and Harriet Arkwright.

1851-61 Both Henrietta and her sister Sophia were living with their father and stepmother, Ellen, at the vicarage in Bodenham, Herefordshire.

1875 Henrietta moved to Grange as housekeeper for her uncle, the Revd Edward Massie (1806-1893), ‘a retired clergyman of the Church of England with no cure’. He retired to Grange in 1872 after his wife died, living at Sandyfield (now the Hampsfield House Hotel). By the time Henrietta joined him he had moved to Nutwood. In 1889 a library of 500 volumes with a reading room ‘taking newspapers and “good” magazines’ was opened in the Working Men’s Institute in Main Street, thanks to the generosity of the Revd Massie, the President of the Institute, and other benefactors.

1886 Henrietta subscribed to the fund for enlarging the primary school in Grange (now the British Legion), and was one of the ladies in charge of the bazaar to raise money for purchasing the new school playground (now the car park on Kents Bank Road).

1893 Henrietta moved to Eggerslack House after the death of her uncle.

The Westmorland Gazette stated that she had been confined to her room for some time by a bronchial attack which developed unexpectedly into pleurisy and pneumonia.

‘The deceased lady was much respected in Grange both for her personal worth and her ready generosity. She took a great interest in all matters affecting the moral and social well-being of the district, and was always foremost to assist any good cause or deserving person. It was partly owing to her instrumentality that a “village nurse” was established in the place, and she was treasurer to the nurse fund from its commencement many years ago. She was also secretary to the local branch of the Scripture Union, which owes its existence to her interest and zeal. She will be greatly missed by all classes of society.’

‘Of Miss Arkwright’s bounty and thought for Grange and its people and its wants one can hardly speak adequately: it is not written in the books of earth, but of heaven’! 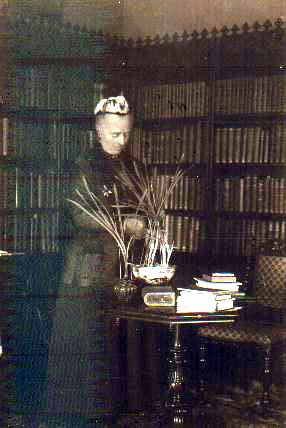