You are here: Home1 / About2 / History3 / Growth and Development

The railway arrived in 1857, and Grange began to develop. The Rev Henry Robert Smith succeeded Revd Rigg and he remained for 30 years. It was he suggested that Grange should be called Grange-over-Sands to avoid confusion with Grange in Borrowdale. He lived in Slack House until the Vicarage was built in 1858.

All this time Grange had been a church without a parish; but on 14 April 1884 a District Chapelry was assigned to St Paul’s, and Holme Island was expressly included within the boundary. 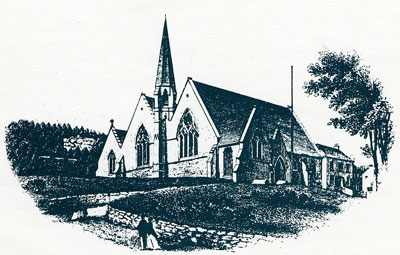 In Edwardian times there was a growing feeling that the church was unworthy and it was resolved to rebuild it if the necessary funds could be raised. The parish hall was built in 1912 so that it could be used for services while the church was being rebuilt, and in 1914 land on Church Hill at the east end of the church was purchased. The 1914-18 War came and subsequently the high price of labour and materials made rebuilding impossible.

It was possible, however, in 1932 to make some improvements. The chancel was enlarged, the south aisle lengthened eastwards, and better vestries were built. The old east window was placed in the Fell Church.

In 1950 the pews were replaced with new ones in oak, and the flooring relaid with oak blocks. The west end was changed considerably so that by the Centenary Year, 1953, there was an oak-panelled baptistry with a new decorated oak font in the north-west corner, a new porch and entrance under the west window, and stained glass in the window itself.

The whole of the west wall interior was covered with oak panelling and churchwarden’s pews were provided.